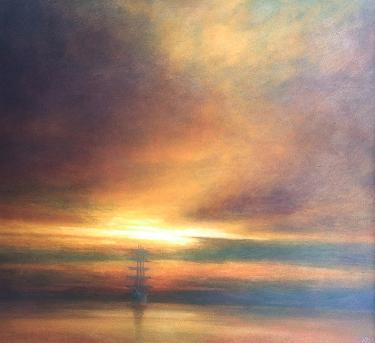 [audio:Eight Bells Clip 1.mp3]
Where it rests upon the bottom leagues and years from you and me.
But there was a time ’round eight bells when the night was windy cold
And the shackled ones were sighing in the darkness of the hold.

The sea was still, the night was calm; no man heard their plea

To almighty Gods for kindness and release from misery
Restless sleepers’ iron bracelets pinked softly as first bell tolled,
The next four marked spirits rising from their shadows in the hold.

[audio:Eight Bells Clip 3.mp3]
Cupped a guttering candle in one shivering hand so he could see
Something flickering in his heart and eye and making his soul yearn
As he walked the creaking planks of mid-night to and fro from bow to stern.

But a tiny portrait of his darling in its gold and silver filigree.
Then came the wraiths around him, and the ship and all its world
So stars’ light seemed torn from Heaven and deep into Hades hurled.

No man heard the eighth bell sing out for the free and slave souls slipped,

For it was over in a heartbeat when the black ship’s keel was split.
She struck a reef, was torn asunder, and swallowed by the sea
Never more to see sweet Africa or the young bride of twenty-three.